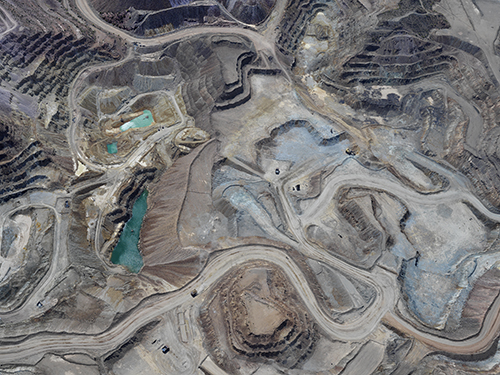 The Yale University Art Gallery is presenting an exhibition of past and recent work by Fazal Sheikh, Exposure (2017–22) and Erasure (2010-15), from September 9th, 2022 to January 8th, 2023.  Fazal Sheikh (born 1965) has spent his career photographing individuals and communities displaced by conflict and environmental change. His work has earned acclaim for its intimate portraits.

The Art Gallery writes of his two showcased bodies of work:

“To make Exposure, set in the American Southwest, Sheikh worked closely with the Utah Diné Bikéyah Native American grassroots organization to examine the human and environmental costs of the exploitation of public lands. The expansive landscapes seen in the series pay homage to the spiritual significance of the land, while portraits and collected testimonies reveal the ongoing but often invisible effects of environmental racism, especially on Indigenous inhabitants. In Erasure, Sheikh presents aerial photographs that record the effects of cultivation, displacement, and climate change on the Negev Desert in southern Israel; the series also includes poignant portraits that put a human face to the struggle of Palestinian Bedouins to remain in villages slated for demolition.”