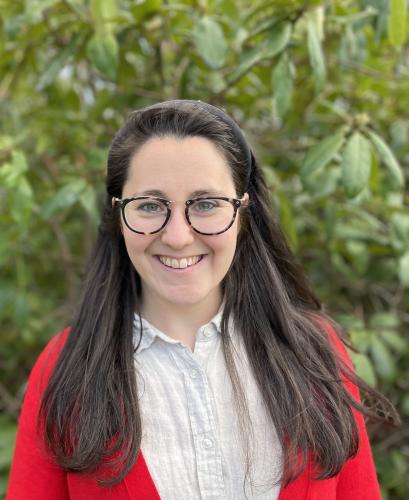 Kristy Ferraro is a PhD candidate working with the Bradford and Schmitz labs at the Yale School of the Environment. As a member of the environmental humanities program, she has combined her interests in ethics and philosophy with her fieldwork. We spoke with her recently to discuss her ecological research on ungulates, and the future of conservation.

What is your research about?

I’m an ecologist, and generally I’m interested in why animals matter. My scientific research explores how large mammals impact biochemical cycles. I look at how herbivores through grazing and deposition of body materials can alter nitrogen and carbon cycles, and ultimately potentially contribute to carbon storage. This has a lot of implications for natural climate solutions, biodiversity, ecosystem preservation, species preservation and individual preservation. It is also related to rewilding efforts, which are efforts to reintroduce animals back into ecosystems that they once were, often for increased biodiversity and carbon storage .

Primarily I use both field and modeling techniques, and at the moment I study reindeer/caribou (they are the same species), white-tailed, deer, elk, and mule deer in various projects. I’m interested in how they are ecosystem collaborators and the ecosystem functions they provide.

On the other side of things, I’m interested in how animals matter ethically and philosophically, how conservationists and ecologists conceptualize animals. There’s been a really long historical dogma in conservation and ecology that individual animals don’t matter, and that what we really value is ecological collectives. A lot of the work that I do with collaborators here is to challenge that idea and demonstrate how they matter both scientifically and ethically. Further, a lot of scientists don’t have ethical backgrounds or any kind of philosophical training. Given conservationists are inherently working in an ethically motivated field, I believe we need the tools applied ethics provide to do our job. My collaborators and I are one of like, maybe six or seven teams that are trying to start this dialogue and get ecologists a little more trained on philosophical thinking.

How have you been combining ethics with biology?

Additionally, as we begin to rethink our relationship with animals, I think that there are lots of avenues for formally recognizing their value, whether it be an animal rights approach or a virtue ethic that requires that one that considers them morally. I’m interested exposing conservation to these frameworks in hopes that doing so will help shift our relationship with the many individuals we share this planet with.

What has the effect of climate change been on the ungulate populations?

Climate change has a very convoluted and intricate relationship with any species, so it’s hard to say what they what it’s doing to ungulate populations as a whole. But global change is certainly playing part in the reduction of caribou populations by changing vegetation and land availability. The same can be said for most migratory ungulate species. For white-tailed deer, it’s a bit trickier of a story: they’re more adapted to urban spaces, so they are actually doing quite well. A lot of times, it’s very population and species specific.

How might conservation work for both humans and animals?

Conservation is considered a crisis discipline, which means it’s responding to challenges on the ground and in real time that are extremely ethically fraught and must balance the needs of both humans and animals. Conservation, at its core, has fundamental values like the preservation of biodiversity and ecological collectives. I believe revisiting these norms is important to make sure conservationists are valuing things that we’ve critically examined and to ensure we have values that create a conservation framework that works for all animals – humans included.

To do this, I’ve conducted workshops that introduce different philosophical and applied ethical frameworks to my fellow conservation biologists. During these, we walk through difficult conservation problems to explore how different perspectives might lead to different decision making, which can have radically different outcomes for both people and animals. I believe that as we are exposed to different ways of valuing and thinking about the world, it really opens up our minds – which is particularly useful to those who have to navigate the crisis discipline that is Conservation Science. I’m also co-teaching a class next semester called Conservation Ethics in which we will explore how applied ethics can and should be integrated into conservation management. Finally, perhaps most importantly, my collaborator Nathalie Sommer and I been publishing philosophical works in scientific journals—which we’ve had success so far doing—so that way scientists might read them. Through this exposure, I hope that we as a field can use the tools of applied ethics to wrestle with different frameworks and ultimately make more ethical decisions for both the people and animals conservation aims to serve.

I also hope that as animal cognition continues to provide new insights we will continue to recognize the ways in which non-human animals are similar to us. And, as we further our understanding and research into philosophy of mind, I hope that we just become more sympathetic and begin to deconstruct this hierarchical view that we have of ourselves as being at the top of the “food chain” or evolutionary process.

How have the environmental humanities informed your research?

The program gave me the freedom and the space to take classes that I wanted surrounding this topic. Oftentimes it’s difficult as a scientist to leave Science Hill. Environmental humanities and the Law, Ethics, and Animals Program (LEAP) have drawn me to middle campus physically, which has allowed for all sorts of productive discussions to happen.

In one of my environmental humanities classes, I was the only scientist in the room. Occupying this space can be challenging but also really rewarding, because it reminds me that I need to use a lot of the tools I learned in my humanities undergraduate degree and in the certificate program in talking to the scientists. I also think it’s important to build bridges between the sciences and the humanities, which can be difficult to construct without physically spending time with one another.

What’s the coolest place that your research has taken you?

My field dissertation work is on a little island off of the island of Newfoundland where I collaborate with scientists from Memorial University. It’s called Fogo Island. It’s an amazing place—there’s a resident herd of about three hundred caribou over there, and you can just go out and see them every day. The community there is really neat, and it’s a really small coastal island. I love it there.

Any fun facts about ungulates?

Reindeer and caribou are the same species, and they are the only ungulates whose females grow antlers as well!