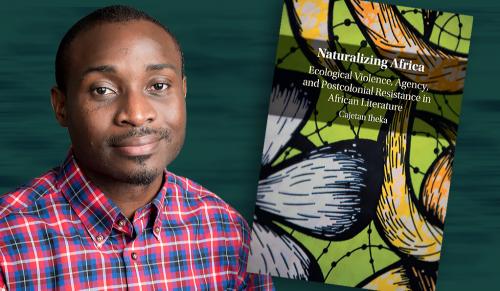 Yale professor Cajetan Iheka was an undergraduate in his home country of Nigeria at the height of unrest in the oil-rich Niger Delta in the 2000s. He was a junior when his professor introduced him to novels, poetry, and drama that depicted the crisis that was going on in the region. This literature ignited his interest in the environment and the ways that literature can guide or transform our thinking about it. Today, Iheka uses African and other literature in his own classroom — and in his own writing — to inspire new thinking on environmental issues.

His first book, “Naturalizing Africa: Ecological Violence, Agency, and Postcolonial Resistance in African Literature,” highlights how literary texts call attention to human-caused environmental degradation on the continent, including the ways in which postcolonial struggles for liberation have contributed to it. He explores how African literature can help to enlighten us about different ways of seeing the world — especially the deep interconnectedness between humans and other beings — to help reduce ecological harm. The book was recently awarded the 2020 First Book Prize from the African Literature Association and received the 2019 Ecocriticism Book Prize from the Association for the Study of Literature and Environment.

Iheka, who is also a Yale Environmental Humanities scholar, recently spoke to YaleNews about the book, his teaching, and his belief that literature can create greater understanding of how to protect the planet and all the living things that share it.

You can read his interview with YaleNews here.