Paul Freedman (History) publishes new book, “American Cuisine and How It Got This Way” 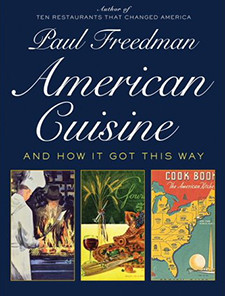 October 15, 2019
Paul Freedman, Chester D. Tripp Professor of History, releases his latest book, American Cuisine and How It Got This Way, with Liveright Press. Freedman specializes in medieval social history, the history of Catalonia, comparative studies of the peasantry, trade in luxury products, and the history of cuisine. In his new book, he refutes the claim that there is no such thing as American cuisine.  Underscoring three themes—regionalism, standardization, and variety— , Freedman examines the history of American food and the nation itself.
From Yale News:
“From the colonial period until after the Civil War, there was a patchwork of regional cooking styles that produced local dishes, such as gumbo from southern Louisiana, or clam chowder from New England. Later, this kind of regional identity was manipulated for historical effect, as in Southern cookbooks that mythologized gracious “plantation hospitality,” rendering invisible the African Americans who originated much of the region’s food.
As the industrial revolution produced rapid changes in every sphere of life, the American palate dramatically shifted from local to processed — such as canned peas, baloney, sliced white bread, and jarred baby food. By the early 20th century, the era of homogenized American food was in full swing. Bolstered by nutrition “experts,” marketing consultants, and advertising executives, food companies convinced consumers that industrial food tasted fine and, more importantly, was convenient and nutritious.
The 1970s saw the zenith of processed-food hegemony, but also the beginning of a food revolution in California. What became known as New American cuisine rejected the blandness of standardized food in favor of the actual taste and pleasure that seasonal, locally grown products provided. The result was a farm-to-table trend that continues to dominate.”
Congratulations, Professor Freeman!