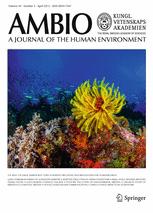 Carl Linnaeus’ work on the ‘economy of nature’ was a major early development in what became the modern field of ecology. This analysis suggests that a key subject of this work that has been ignored or misunderstood for 250 years is the rural livelihoods, especially swidden (or slash-and-burn) agriculture, which Linnaeus studied during his expeditions through rural Sweden. Rereading his reports in the light of modern work on swiddens, political ecology, and the history of science affords a new appreciation of Linnaeus’ insights into traditional systems of resource exploitation. The logic of nutrient cycling in swidden agriculture and its utilization of natural dynamics to serve human ends exemplify the principles of the ‘economy of nature’, and gave Linnaeus a philosophical basis for understanding and defending this system of agriculture as well as other rural resource use systems in Sweden. This analysis sheds new light on Linnaeus’ ethnographic work, his view of folk environmental knowledge, and his often derided identification with Sweden’s ethnic peoples.