Mark E. Frank, “Frontier atmosphere,” The British Journal for the History of Science 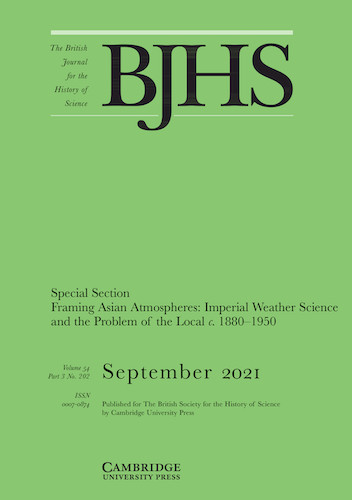 Mark E. Frank, ”Frontier atmosphere: observation and regret at Chinese weather stations in Tibet, 1939–1949”, The British Journal for the History of Science 54:3 (September 2021)

Across Tibet during the 1940s, young Han Chinese weather observers became stranded at their weather stations, where they faced illness, poverty and isolation as they pleaded with their superiors for relief. Building on the premise that China exercised ‘imperial nationalism’ in Tibet, and in light of scholarship that emphasizes the desirous ‘gaze’ of imperial observers toward the frontier, this essay considers how the meteorological archive might disrupt our understanding of the relationship between observation and empire. Meteorology presented a new way of viewing the landscape that deliberately disregarded the embodied experience of the observer in favour of instrument-mediated readings. The process produced a bifurcated archive, in which stations disseminated quantitative weather charts as a matter of public interest while privately recording the embodied and often miserable experiences of observational staff on the frontier. Unpublished letters between observers and supervisors offer a rare glimpse into the frontier as experienced by reluctant or unwilling agents of the state.