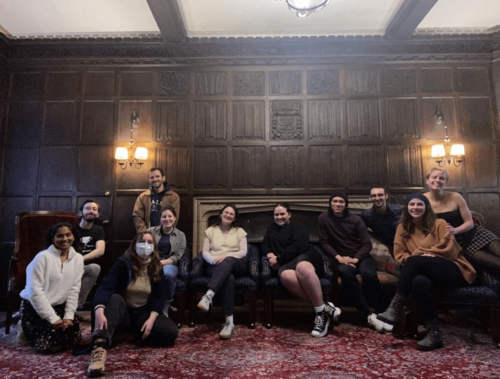 The Yale Feminist Science and Technology Collective is an undergraduate group that explores questions in the sciences and humanities.  Founders of the organization—Akio Tamura-Ho, Yale College ’23, and Elaina Foley, Yale College, ’22+1—took time to speak with us about the story, mission, and future of the group.

What is Yale fSTS? When was it founded? What inspired you both to come together and create it?

Akio Tamura-Ho: I did not come into undergrad in the history of science major, but I took a few classes with Joanna Radin.  I found STS through these history of science classes that were cross-listed with other disciplines.  I wanted more of this, but I didn’t know how to get more STS in my life, because there was no department or program.  There is history of science, but not everything in the major is necessarily STS, feminist, or pays attention to colonial and critical race elements.  So I sent out an email to people that were in a variety of the STS classes that I was in. And Elaina responded, saying that they had also had the same thoughts.  We then created the fSTS collective.

What has fSTS been working on lately?

Elaina Foley: In the last year and a half, we’ve had various speaker events. We’ve hosted some smaller workshops that include faculty, grad students, and outside academics. We’ve also had smaller community focus groups where students have been able to share shorter presentations about what they’re interested in, as well as just chat in a more casual setting than the classroom. Basically, we’re trying to find ways to facilitate that sense of STS community that we were both missing at the beginning of our time in HSHM.  We’ve gotten a lot of support from professors who have helped us to facilitate these moments as well as from Yale Environmental Humanities, which has funded a lot of these events.

What are some interesting events and speakers you have hosted with support from the Environmental Humanities grant program?

Akio Tamura-Ho: Last year we had a really powerful workshop on mobilizing STS critiques with a grad student, Ali Renna.  We got to see how these kinds of perspectives can make an impact in real life.  I also think that Powerpoint nights—which we’ve had two of, where students share presentations about their research interests with each other—have been really fun.  People share brief talks about their STS interests, such as the idea of light as a social construct and Indigenous health histories.

Elaina Foley: Kelsey Henry came last semester and gave a really lovely chat from her perspective as a grad student involved with critical histories of science and biomedicine. She’s engaged with disability studies programming and disability justice initiatives at Yale and beyond. We also had a visiting artist this semester, Camila Marambio, who spoke about how you can create spaces of fusion between STEM and the humanities and do really meaningful, community-led research that informs environmental policy and approaches.

Any classes or opportunities you would recommend someone interested in STS-related fields to try out?

Akio Tamura-Ho:  Joanna Radin is how both Elaina and I found ourselves in STS, so definitely take any classes that are taught by her.  We have a few other faculty mentors who have been informally involved one way or another: Lisa Messeri in anthropology, Kalindi Vora in WGSS have been affiliated with our undergrad group in some capacity.

What directions do you hope to take the fSTS collective?

Elaina Foley: I’m really interested in how this group can operate as a hub of resources as a way for students to sort of dip into it, see if there are any actions that they’d like to get involved in or ask for support with.  We try to offer material resources—we usually put together a class list of upcoming STS-inclined classes for the next semester, and/or grants that would support people’s particular work. I would say that it’s also about creating a network of people who are well-versed in STS-related questions and are then able to support incoming undergraduates who have questions of their own. It’s really trying to think of how you can bring all these things into one flexible, collaborative space for students.

Akio Tamura-Ho: We really just want it to be a space that is welcoming for people, especially undergrads who probably wouldn’t have much exposure to STS when they first come here. Maybe they’ve taken a few classes, but we want to make sure that it’s accessible for everyone.

Elaina Foley: I would also say that sometimes, topics that fall more in critical theory can feel a bit esoteric. To me it felt really out of reach, and I was really lucky to have someone like Joanna Radin bring us into the community of people talking about feminist science studies. But I think that it would be really challenging to try and get a foothold in these things, especially if you don’t have access to these questions or ways of thinking before college; it certainly wasn’t something that was covered at all in my high school. We want the entrance into STS to feel easy and non-threatening.

Akio Ho: We really wouldn’t have existed without the Public Humanities grant from the Environmental Humanities, which I think shows how important these kinds of grants can be for undergrad spaces.  A lot of clubs at the undergrad level get funded through the extracurricular fund, which doesn’t cover speaker events.  Having this grant was really valuable to bringing in these outside speakers and doing the kind of academic work that wouldn’t otherwise have been supplied.