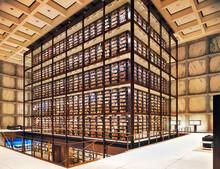 The Beinecke Rare Book & Manuscript Library will be holding “The World in Maps” exhibit until January 8th, 2023. The collection—showcased in flat display cases on the library’s ground floor—presents many of the most historically significant manuscript maps from the late medieval and early modern period

In a statement from the library:

“It is focused on portolan charts - large, colorful charts that showed the shoreline of the Mediterranean, and were used by sailors to navigate from port to port. These maps were crucial to the expansion of European trade in the fifteenth and sixteenth century. Yale University Library has one of the most significant map collections of this period and owns some unique items not found in any other collection. When the holdings previously in the Map Room in Sterling Memorial Library were consolidated with Beinecke Rare Book and Manuscript Library collections in 2018, it formed the largest single repository of portolan maps in North America.

This exhibition presents maps from several different historical groups and demonstrates how maps functioned to place people within a larger world context. While primarily focusing on European maps, it also includes Middle Eastern and Asian world maps to illustrate common elements and also highlight significant differences. In addition, the exhibition presents some map forgeries and how they were determined to be fakes using scientific and historic analysis.”

The exhibit is open to the public during library operating hours.