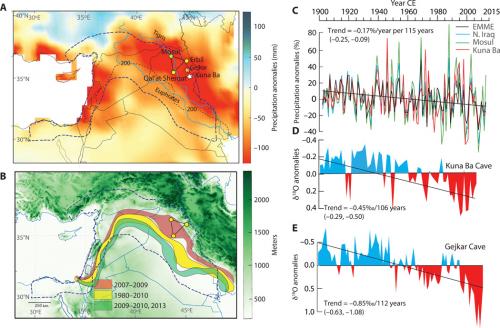 Northern Iraq was the political and economic center of the Neo-Assyrian Empire (c. 912 to 609 BCE)—the largest and most powerful empire of its time. After more than two centuries of regional dominance, the Neo-Assyrian state plummeted from its zenith (c. 670 BCE) to complete political collapse (c. 615 to 609 BCE). Earlier explanations for the Assyrian collapse focused on the roles of internal politico-economic conflicts, territorial overextension, and military defeat. Here, we present a high-resolution and precisely dated speleothem record of climate change from the Kuna Ba cave in northern Iraq, which suggests that the empire’s rise occurred during a two-centuries-long interval of anomalously wet climate in the context of the past 4000 years, while megadroughts during the early-mid seventh century BCE, as severe as recent droughts in the region but lasting for decades, triggered a decline in Assyria’s agrarian productivity and thus contributed to its eventual political and economic collapse.