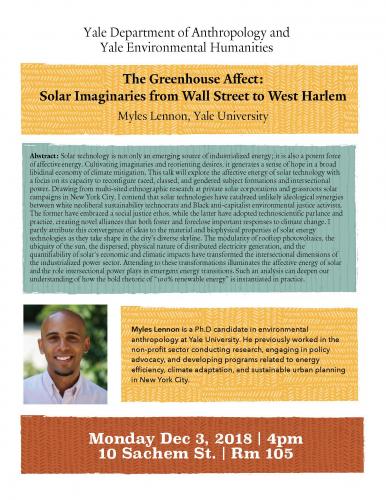 Solar technology is not only an emerging source of industrialized energy; it is also a potent force of affective energy. Cultivating imaginaries and reorienting desires, it generates a sense of hope in a broad libidinal economy of climate mitigation. This talk will explore the affective energy of solar technology with a focus on its capacity to reconfigure raced, classed, and gendered subject formations and intersectional power. Drawing from multi-sited ethnographic research at private solar corporations and grassroots solar campaigns in New York City, I contend that solar technologies have catalyzed unlikely ideological synergies between white neoliberal sustainability technocrats and Black anti-capitalist environmental justice activists. The former have embraced a social justice ethos, while the latter have adopted technoscientific parlance and practice, creating novel alliances that both foster and foreclose important responses to climate change. I partly attribute this convergence of ideas to the material and biophysical properties of solar energy technologies as they take shape in the city’s diverse skyline. The modularity of rooftop photovoltaics, the ubiquity of the sun, the dispersed, physical nature of distributed electricity generation, and the quantifiability of solar’s economic and climatic impacts have transformed the intersectional dimensions of the industrialized power sector. Attending to these transformations illuminates the affective energy of solar and the role intersectional power plays in emergent energy transitions. Such an analysis can deepen our understanding of how the bold rhetoric of “100% renewable energy” is instantiated in practice.