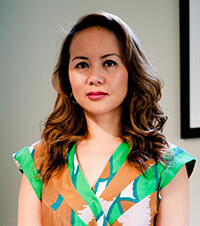 Refugee memories line my exegesis of water and war in the Vietnamese diasporic films at the center of this talk, films such as Trần Anh Hùng’s La Pierre de l’Attente (1991) [The Waiting Stone], Khoa Đỗ’s Mother Fish (2009), and Trinh T. Minh-ha’s Forgetting Vietnam (2016), and Quyen Nguyên-Le’s Nước (2016). The presentation foregrounds how water resonates as both membrane and memory. My readings contend that water acts as a conduit for the transfer of knowledge and the ocean an archive for dead refugee bodies but also of stories and secrets. I will discuss these texts from a trans-Vietnamese feminist point of view, a method of analysis that puts Việt Nam and its current managements of power under an interrogatory lens and calls for an analysis of the images of gender, minority subjects, sexual minorities, in the transnational cinemas of Việt Nam and the diaspora. This mode of analysis coalesces with a Critical Refugee Studies (CRS) methodology that I foreground here as well. Specifically, CRS focuses on the intersection between private grief and public trauma that refugees experience and magnifies the political forces underlying the intimate sites of familial relationality and queer sociality. Drawing on the ways that water (or nước) has an especial resonance in the Vietnamese language, by way of ending the talk, I put pressure on the ways that the films sonically and imagistically convey water’s rehabilitative mode of tending to refugee grief and memory.

Lan Duong is Associate Professor in Cinema and Media Studies at the University of Southern California. She is the author of Treacherous Subjects: Gender, Culture, and Trans-Vietnamese Feminism (Temple University Press, 2012). Dr. Duong’s second book project, Transnational Vietnamese Cinemas and the Archives of Memory, examines Vietnamese cinema from its inception to the present day. Her research interests include feminist film theory, postcolonial literature, and Asian/American film and literature. Duong is a Founding Member of the Critical Refugee Studies Collective and manages the CRSC website (www.criticalrefugeestudies.com). She is also co-editor of the Critical Refugee Studies Book Series at UC Press.