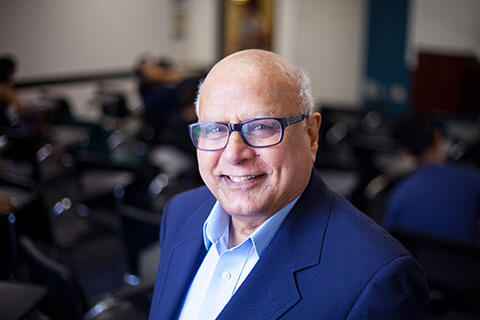 It is customary to consider Indian literature as one single unit with several regional segments. Sarvepalli Radhakrishnan, past President of India, famously said: Indian Literature is one, written in many languages. This has been the basis to analyze, discuss and interpret Indian literary genres, values, culture, and ideology. Questioning this monolithic perspective, I suggest in this talk three ecological bases to the study Indian literary texts: land, pastoralism, and trade. From this point of view, the Ramayana is a landed narrative, and the Mahabharata is a pastoral narrative and stories of the Kathasaritsagara represent the narratives of a trading culture. This presentation traces how each culture developed values of heroism, virtue, and truth suitable to it. From this perspective, there is no such a thing as one Indian literature, nor a national epic, which is a development after the landed culture dominated the other two and the idea of a nation emerged.
Velcheru Narayana Rao is author, and translator of classical works from Telugu, and Sanskrit into English. His works include a translation of Manucaritramu, Allasani Peddeana’s 16th-century poem; The Demon’s Daughter: A Love Story, a translation of a 16th-century novel in verse by Pingali Suranna; How Urvashi Was Won, a translation of Kalidasa’s Vikaramorvsaiya; and Srinatha, the Poet Who Made Gods and Kings, all with David Shulman; as well as Textures of Time: Writing History in South India, with Shulman and Sanjay Subrahmanyam. Narayana Rao’s recent works include Text and Tradition in South India, (Delhi: Permanent Black, 2016, and Albany, NY: State University Press of New York, 2017,) and Viswanadha Satyanarayana, Ha Ha Hu Hu: A Horse-Headed God in Trafalgar Square (Gurgaon: Penguin Random House India, 2018). With his translations, which always carry a long Afterword, and other works on Telugu literature, Narayana Rao radically reinterpreted Telugu literature for Telugu readers while introducing it to the Western audience. His ideas of text and author critically impact several other literatures in Indian languages as well and call for a rethinking of these concepts.
Narayana Rao taught Telugu and Indian literatures for 38 years at the University of Wisconsin–Madison, where he was Krishnadevaraya Professor of Languages and Cultures of Asia, and for a short period at the University of Chicago. In 2015, he was named the first Visweswara Rao and Sita Koppaka Professor in Telugu Culture, Literature, and History at Emory University. Among other awards and honors, Narayana Rao was a fellow at the Institute for Advanced Studies at Hebrew University in Jerusalem, a John Simon Guggenheim Fellow, a senior fellow at the Institute for Research in the Humanities at UW–Madison, and Fellow, Wissenschaftskolleg zu Berlin.