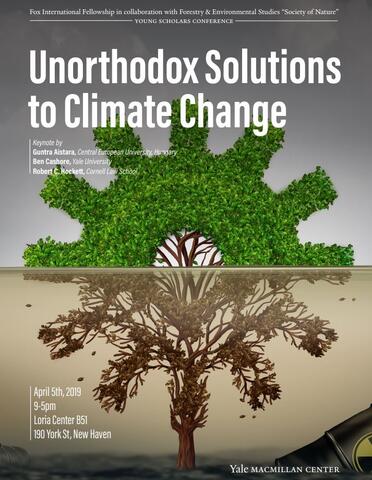 Climate change has been a pressing concern worldwide at least for the last 30 years. The recent IPCC report shows a solid consensus that the immediate social and economic consequences are far more catastrophic than previously thought. Although most climate change studies have preferred to focus on top-down policies, this approach has so far not been successful in achieving meaningful and effective solutions. The global climate crisis is real and imminent, and yet most orthodox approaches focus mainly on compromise or adaptation at the expense of problem-solving. As part of the celebrations for the 30th Anniversary of the Fox Fellowship, Yale University will be hosting a public conference that challenges this the climate orthodoxy in the quest for transformative policy answers.

Professor Robert C. Hockett (Cornell University) who has been working with Rep. Alexandria Ocasio-Cortez on the Green New Deal and will give a presentation followed by a Q&A session with the audience.

In addition, the conference will have two discussions, one led by Professor Guntra Aistara (Central European University) and another by Professor Ben Cashore (Yale University). Each one will be followed by the comments and thoughts of three respondents, and a Q&A session with the audience.