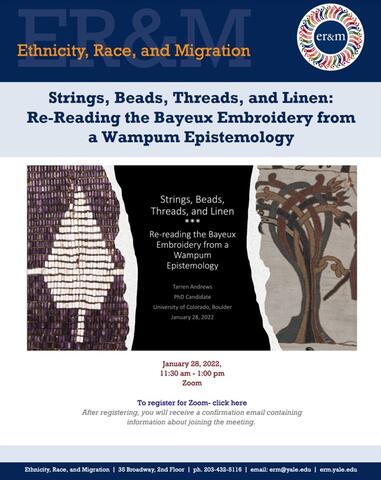 The Bayeux Embroidery, often erroneously referred to as the Bayeux Tapestry, is famous for its narration of the Norman Conquest in 1066. Its images have been mined for historical details about early medieval arms and armor, battle strategy, architecture, and even referenced in studies of historical astronomy and ophthalmology. Interpretations of the textile often make competing claims about its value as either English or Norman propaganda, focusing on contrasting depictions of the English King Harold and the Norman Duke William. In this talk I propose an alternate approach to reading the textile, one grounded not in Western attachments to international conflict but informed by another genre of non-textual record keeping—wampum belts. Wampum belts, critical as they are to the Haudenosaunee in the creation and maintenance of Peace, offer a different epistemological foundation from which we can re-read the Bayeux Embroidery. Understanding the textile as a document capable of shaping international relations reveals the moments wherein Peace might have been possible, even though it was ultimately not achieved. This wampum-informed reading of the Bayeux Embroidery re-frames its story, not just as early medieval history propaganda, but as an important artifact of the early story of settler colonialism.

Tarren Andrews is a PhD candidate in the English department at the University of Colorado, Boulder, graduating in May 2022. She came to CU after completing her MA in later-medieval English literature at the University of Montana in 2015. After her MA, Tarren adjuncted at Université Jean Jaurès in Toulouse, France and at Salish Kootenai College, a tribal institution based in her home community on the Flathead Indian Reservation. Her current work focuses on recovering the genealogies of settler colonialism in the early medieval North Atlantic. Relying on critical Indigenous thought and theory, Tarren’s dissertation project, “Colonization is not a Metaphor,” reinterprets the historiography, material culture, literature, and law in the North Atlantic pre-1100. This interdisciplinary work has helped Tarren specialize in Indigenous feminisms, Old English literature, and medieval and modern legal history. She is a founding member of the Native Graduate Student Group at CU. In 2018 Tarren received the Dorothy Martin Endowment Fund Award for her work with Indigenous students at CU, and the inaugural Belle da Costa Greene Award from the Medieval Academy of America in 2019.