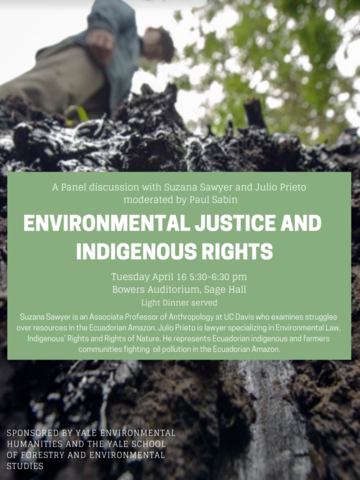 Suzana Sawyer is an Associate Professor of Anthropology at UC Davis, and the author of Crude Chronicles: Indigenous Politics, Multinational Oil, and Neoliberalism in Ecuador. Professor Sawyer’s research examines struggles over resources in the Ecuadorian Amazon, focusing specifically on conflicts over land and petroleum development among forest peoples, the state, and multinational oil companies.

Julio Prieto is lawyer specializing in Environmental Law, Indigenous’ Rights and Rights of Nature. Since 2006 he has been working as litigant attorney for Ecuadorian indigenous and farmers communities fighting Chevron Corporation over oil pollution in the Ecuadorian Amazon. At this position, he was part of the team achieving an historical victory and award of more than 9,6 billion dollars. He is currently helping his clients to collect the payment from Chevron and planning the ecological restoration for more than 400.000 hectares. His experience on these efforts brought him to collaborate towards a binding treaty on transnational corporations and human rights. He is the author of Rights of Nature, Rationale and Jurisdictional Enforcement.

Paul Sabin is a Professor of History and American Studies at Yale University. He teaches United States environmental history, energy politics, and political, legal, and economic history.  He coordinates the Yale Environmental History working group and the Yale Environmental Humanities Initiative, and helps lead Yale’s undergraduate Environmental Studies major.  He is the author of The Bet: Paul Ehrlich, Julian Simon, and Our Gamble Over Earth’s Future (2013), which draws on an iconic story about population and resources to examine the clash between environmentalists and their critics since the late 1960s.  His first book, Crude Politics: The California Oil Market, 1900-1940 (2005), explores how politics and law shaped a growing dependence on petroleum in California and the nation.  Sabin’s current research examines the evolution and impact of modern environmental law and regulation in the United States.  He also has written on international resource frontiers, U.S. overseas expansion, and energy and legal history.