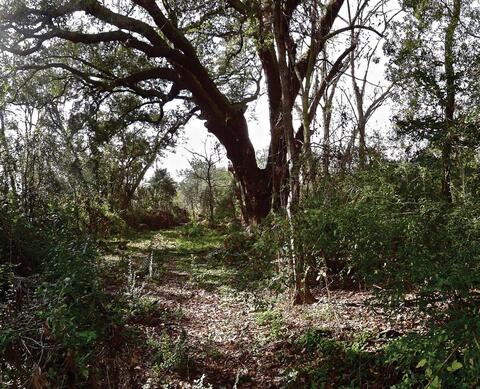 Event time:
Sunday, October 16, 2022 - 12:15pm
Location:
Yale Center for British Art See map
Event description:
Join our student guides to learn more about the installation of “Steve McQueen: Lynching Tree.”
“Lynching Tree” (2013) is a color photograph mounted in a lightbox that depicts an old tree with thick, sprawling branches. The tree stands in a clearing littered with leaves and grass and is surrounded by bushes and scrawny saplings. Only the title of the image reveals the horror of this apparently pastoral scene. The tree was used as a gallows for enslaved Black people; the unmarked graves of victims lie beneath it.
McQueen took the photograph on the outskirts of New Orleans in 2012, at one of the filming locations for “12 Years a Slave” (2013). In the film, Solomon Northup passes by the tree, knowing that he easily could have been one of the two young men whose murder he witnesses. In “Lynching Tree,” McQueen memorializes the lives and deaths of Black people in the antebellum South. Like many landscape paintings in the YCBA collection, the photograph simultaneously reveals and obscures the violence of British colonialism and the transatlantic slave trade.
Tours meet in the Entrance Court.
Admission:
Free
Open to:
General Public
Original event page