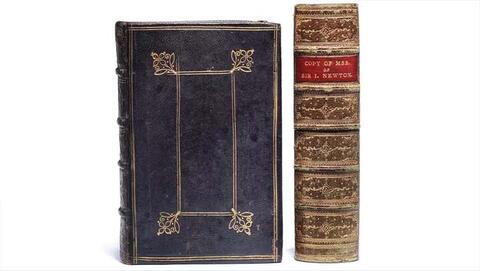 Event time:
Wednesday, November 16, 2022 - 4:00pm
Location:
Beinecke Rare Book and Manuscript Library Mezzanine See map
121 Wall Street
Event description:
Scott Mandelbrote, Director of Studies in History and Perne Librarian at Peterhouse, Cambridge, will discuss the discovery of Isaac Newton’s notebook from the late 1670s, by John Wickins, Newton’s friend and contemporary at Trinity College, Cambridge. This talk will discuss how the notebook was acquired for the Cambridge University Library, its significance for their collections and the study of Newton’s career in the history of science, and how the book trade uncovers new historical knowledge and importance of collecting for institutions.
Scott Mandelbrote is a Fellow of Peterhouse, Cambridge, and a scholar focused on early modern European intellectual history. He is an editorial director of The Newton Project, currently based at the University of Oxford, and general editor of the publications of the Oxford Bibliographical Society. He also serves on the Senior Committee of the Oxford University Society of Bibliophiles and founder of the Cambridge Bibliophiles.
Admission:
Free
Open to:
General Public
Original event page