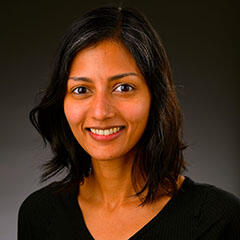 Samantha Iyer is a historian of international political economy in the late nineteenth and twentieth centuries, and her work focuses on the United States, the Middle East, and South Asia. Her general concern is to make sense of large-scale political and economic change, without ignoring the insights that social and cultural historians have taught us about the significance of everyday conflicts over race, class, and gender in shaping our world.
Her current book project considers, through the prism of food, how the United States emerged as a global power by the mid-twentieth century out of a British imperial era. It takes as its starting point an often ignored, yet fundamental characteristic of the United States in the post-World War II era: In contrast to imperial Britain, an industrial power that was dependent on its colonies and former colonies for food and other raw materials, the United States was an agricultural superpower. With the establishment of its food aid program in 1954, it became the dominant exporter of food staples to what came to be known as the Third World. The book investigates the causes and effects of this shift by examining changing modes of producing, organizing, calculating, distributing, and consuming agricultural surpluses from late nineteenth century to the 1970s. In addition to the United States, the story focuses on Egypt and India: two major territories of the British Empire that were among the largest importers of U.S. food aid after their independence. A portion of Iyer’s research as been published as an article, “Colonial Population and Idea of Development,” Comparative Studies in Society and History (2013).
The book project is part of a larger effort to grapple with a methodological question—the problem of scale—that has been inadequately addressed in the fields that are now called global history and history of capitalism. My work tries to locate and understand systemic changes in an interconnected world. But it insists that actors who commanded capital, political power, or intellectual influence over large swathes of the globe did not act autonomously in making this world. Drawing on international archival research that relies heavily on non-European language sources, it shows how large-scale political, economic, and intellectual shifts bore the imprint of the ideas and activities of peasants, workers, and consumers.
My research has been supported by various fellowships, including the Mellon/ACLS Dissertation Completion Fellowship, the SSRC’s International Dissertation Research Fellowship, and the Fulbright. I come to Fordham from Harvard, where I was a Global American Studies Fellow at the Warren Center for Studies in American History.