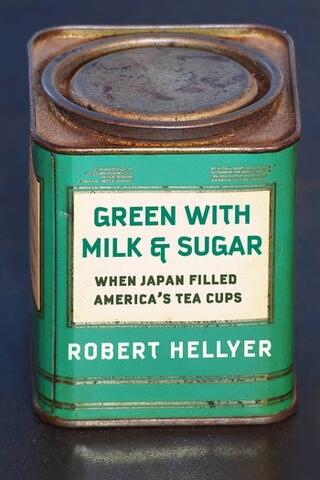 Today, Americans are some of the world’s biggest consumers of black teas; in Japan, green tea, especially sencha, is preferred. These national partialities, Robert Hellyer reveals, are deeply entwined. Tracing the trans-Pacific tea trade from the eighteenth century onward, Green with Milk and Sugar shows how interconnections between Japan and the United States have influenced the daily habits of people in both countries.

Hellyer explores the forgotten American penchant for Japanese green tea and how it shaped Japanese tastes. In the nineteenth century, Americans favored green teas, which were imported from China until Japan developed an export industry centered on the United States. The influx of Japanese imports democratized green tea: Americans of all classes, particularly Midwesterners, made it their daily beverage—which they drank hot, often with milk and sugar. In the 1920s, socioeconomic trends and racial prejudices pushed Americans toward black teas from Ceylon and India. Facing a glut, Japanese merchants aggressively marketed sencha on their home and imperial markets, transforming it into an icon of Japanese culture.

Featuring lively stories of the people involved in the tea trade—including samurai turned tea farmers and Hellyer’s own ancestors—Green with Milk and Sugar offers not only a social and commodity history of tea in the United States and Japan but also new insights into how national customs have profound if often hidden international dimensions.

Robert Hellyer is Associate Professor of History at Wake Forest University. He received a PhD in History from Stanford University in 2001. A historian of early modern and modern Japan, Hellyer has explored foreign relations from the seventeenth to the nineteenth centuries, research presented in Defining Engagement: Japan and Global Contexts, 1640-1868 (Harvard, 2009). He co-organized a multi-year project that examined the Meiji Restoration surrounding the 150-year anniversary in 2018, an initiative that resulted in Robert Hellyer and Harald Fuess, eds., The Meiji Restoration: Japan as a Global Nation (Cambridge, 2020). He also co-edited the forthcoming Chronicling Westerners in Nineteenth-Century East Asia: Lives, Linkages, and Imperial Connections (Bloomsbury, 2022). The research and writing of Green With Milk and Sugar: When Japan Filled America’s Tea Cups (Columbia, 2021) was supported by Smithsonian, Japan Foundation, Hakuhodo Foundation, Sainsbury Institute, and NEH fellowships.

Admission:
Free but register in advance
Open to:
Yale Community Only