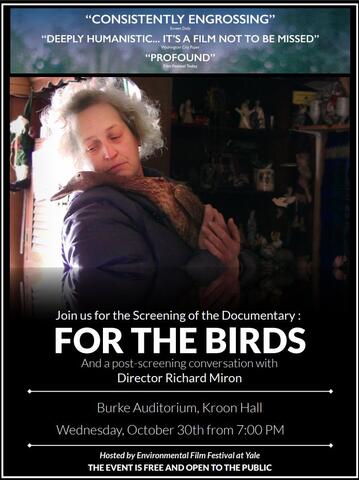 The Environmental Film Festival at Yale (EFFY) is hosting a screening of a new documentary, For the Birds, next Wednesday, October 30, at 7 pm in Burke Auditorium. You can find the trailer at this link (http://forthebirdsdocumentary.com), and this is the director’s synopsis: “In Richard Miron’s surprising and empathetic For the Birds, we follow an unusual woman named Kathy who lives with 200 pet chickens, ducks, geese and turkeys. What starts as a story seemingly about Kathy’s battle with local animal advocacy groups slowly transforms into an intimate drama about her relationship with her husband Gary, and the toll the birds have taken on their marriage and her well-being. Filmed over the course of five years, this sensitive tale of one woman’s world breaking down—poignant and absorbing in equal measure—is ultimately one of hope about the possibility of regaining one’s life.” The film deals with animal rights, human relationships with animals as pets and objects for hoarding, and how the legal system handles animal hoarding cases. The was produced by Richard Miron, Yale College ’12, and Jeffrey Star ‘13. The New York Times chose it as a “critic’s pick” and called it “indelible … a psychological portrait that develops mystery the more it reveals.” Brian Reed, host and co-creator of the blockbuster podcast S-Town, was the film’s executive producer.