“Reimagining the Past: The Dilemma of Indigenous Persian Architecture” Panel, (Council on Middle East Studies) 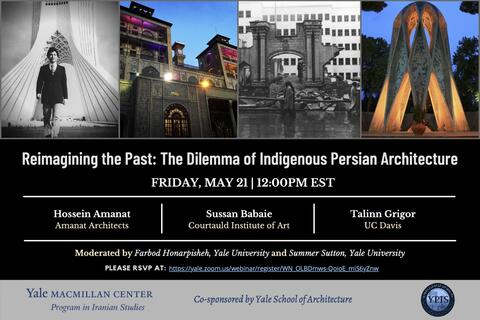 Hossein Amanat, Amanat Architects
“Persian Architecture: Past Inspiring Present”
Sussan Babaie, Courtauld Institute of Art
“Losing the Pedestrian: Maidan to Modern Maidan”
Talinn Grigor, UC Davis
“Liminality and the Modern Movement in Iran”
Moderated by Farbod Honarpisheh, Yale University and Summer Sutton, Yale University
More than a century of exposure to European modernity and its urbanization and architectural practices changed the Iranian urban landscape. New styles, concepts, functions and construction techniques came to redefine the very vocabulary of public and private spaces. The project of modernization relegated the indigenous Persian urban and architectural principles to the realm of outmoded, or at the best, made them subjects of nostalgic and decorative referencing.
In an anxious rush to import Western “progress,” entire city quarters were demolished or damaged beyond repair, often turning them into instant slums. Regimented street grid ran across bazaars and destroyed mansions, monuments, city gates, and cultural landmarks. Royal palaces and government houses gave way to horrid government and commercial buildings devoid of identity or came to serve as military barracks. Hinterlands around towns and cities became subjects of land speculation, old urban quarters slowly dilapidated into ruination. In a rush toward functionality, mindless copying of modernist style created climatically unsuitable and aesthetically unappealing structures.
The panelists are invited to asks whether this was an unavoidable process given the positivist rush to become modern which prevailed over the Iranian culture, economy, and society especially in the 20th century. Are the arches, domes and structures of the past were bound to disappear and, more importantly, the concepts behind spaces, forms and techniques were to be rejected as archaic and dysfunctional? What are the means and methods by which certain elements of this past can or should be rescued from the amnesia unto which they have fallen? How realistically can the Persian spatial relations, techniques, and sustainable use of resources be recaptured and reconciled with contemporary contingents of functionality and efficiency?