Peter Singer (Princeton), “Eating to Save the Planet, Avoid Cruelty and Reduce the Risk of Pandemics” (Biomedical Ethics at Yale School of Medicine) 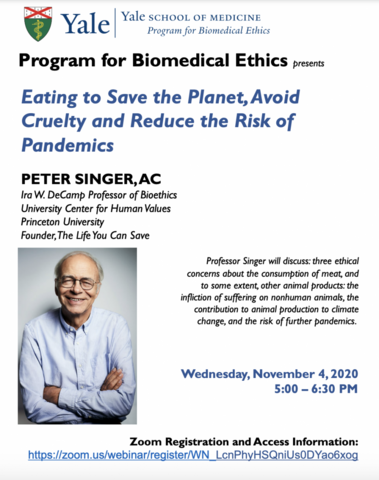 Professor Singer is known especially for his work on the ethics of our treatment of animals, for his controversial critique of the sanctity of life doctrine in bioethics, and for his writings on the obligations of the affluent to aid those living in extreme poverty. He first became well-known internationally after the publication of Animal Liberation in 1975. In 2011 Time included Animal Liberation on its “All-TIME” list of the 100 best nonfiction books published in English since the magazine began, in 1923. Singer has written, co-authored, edited or co-edited more than 50 books, including Practical Ethics; The Expanding Circle; How Are We to Live?, Rethinking Life and Death, The Ethics of What We Eat (with Jim Mason). His most recent book, Why Vegan? was published last month in the Penguin “Great Ideas” series. Professor Singer is the founder The Life You Can Save, an organization based on his book of the same name. eBook and audiobook versions are available free from its website, www.thelifeyoucansave.org.