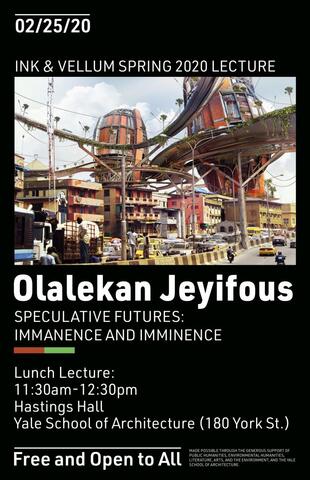 Event time:
Tuesday, February 25, 2020 - 11:30am
Location:
Hastings Hall, Yale School of Architecture See map
180 York Street
New Haven, CT 06511
Event description:
Olalekan Jeyifous is a Brooklyn-based artist and designer. He received a BArch from Cornell University and has since exhibited at venues such as the Studio Museum in Harlem, the MoMA, the Vitra Design Museum and the Guggenheim in Bilbao, Spain. He has received a number of grants for his artwork such as a fellowship from the New York Foundation of the Arts, the New York State Council on the Arts and the Brooklyn Arts Council.  In addition to his extensive exhibition history, Jeyifous has spent over a decade creating large-scale artwork for a variety of public spaces.