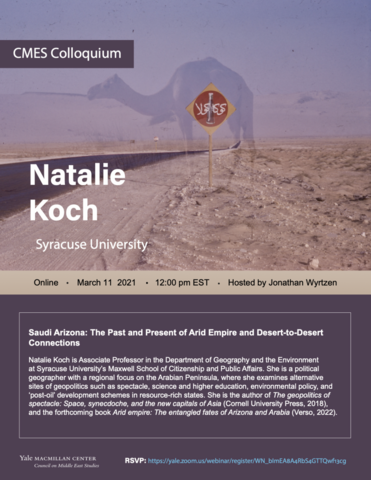 Event time:
Thursday, March 11, 2021 - 12:00pm
Location:
https://yale.zoom.us/webinar/register/WN_bImEA8A4RbS4GTTQwf13cg See map
Event description:
The Saudi Arabian dairy company Almarai, the largest in the Middle East, has been growing alfalfa in the Arizona desert since buying a farm near Vicksburg in 2014. Almarai is headquartered at Al Kharj farms, just outside of Riyadh, where it has a herd of more than 93,000 milk cows. Why are Saudi cows now feasting on Arizona-grown alfalfa? And given that dairy and alfalfa farms both require an immense amount of water to maintain, what explains these developments in the deserts of Arizona and Arabia? The answers are historical and contemporary. As a study in political geography and environmental history, this talk uncovers a geopolitics of connection that has long linked the US Southwest and the Middle East, as well as the interlocking imperial visions advanced in their deserts. It shows how Almarai’s purchase of the Vicksburg farm is part of a broader genealogy of exchanges between Saudi Arabia and Arizona – dating to the early 1940s. To understand these arid entanglements, I trace the environmental and political narratives binding experts not just across space, but also time – as well as the imperial projects they served and themselves manifested. This is illustrated through the history of Al Kharj and the decades-long agricultural connections between Arizona and Saudi Arabia, united around produce the “desert” as a naturalized site of scarcity, but also of opportunity – not just to serve personal interests, but also to build politically and economically useful bridges between the two regions.
Natalie Koch is Associate Professor in the Department of Geography and the Environment at Syracuse University’s Maxwell School of Citizenship and Public Affairs. She is a political geographer with a regional focus on the Arabian Peninsula, where she examines alternative sites of geopolitics such as spectacle, science and higher education, environmental policy, and ‘post-oil’ development schemes in resource-rich states. She is the author of The geopolitics of spectacle: Space, synecdoche, and the new capitals of Asia (Cornell University Press, 2018), and the forthcoming book Arid empire: The entangled fates of Arizona and Arabia (Verso, 2022).