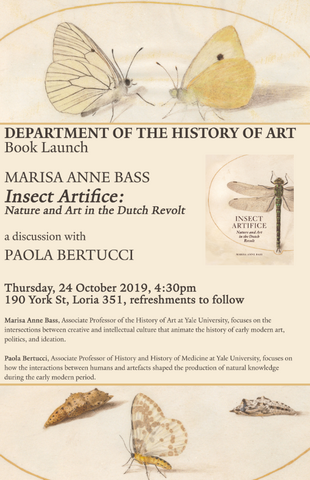 Insect Artifice: Nature and Art in the Dutch Revolt (Princeton 2019) recovers the intersections between natural history, politics, art, and philosophy in the late sixteenth-century Low Countries. At its center are the stunning miniatures of animals and insects produced by Joris Hoefnagel, a virtuosic artist and polymath who turned to the study of nature amidst the political and religious upheaval of the Dutch Revolt. Insect Artifice reveals how Hoefnagel and his colleagues engaged with natural philosophy as a means to reflect on their experiences of war and exile, and found refuge from the threats of iconoclasm and inquisition in the manuscript medium itself. This is a book that challenges the persistent application of the binary ‘art and science’ to Hoefnagel’s lifetime, and which addresses the doubts about human exceptionalism (and the knowability of the natural world) that tempered the early modern pursuit of empirical inquiry.