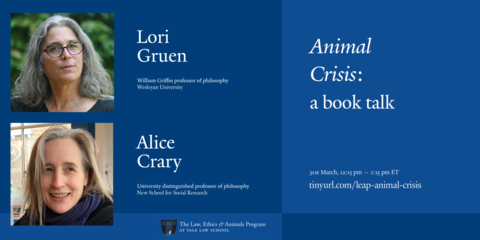 The issues of the day make it clear: the attitudes that authorize human abuses of nonhuman animals harm us all. From global pandemics and mass extinctions to habitat destruction and catastrophic climate change, humans and non-humans face a complex set of intertwined problems. But animal ethics as it is usually discussed doesn’t avail itself of important insights for addressing exploitation and oppression because it remains largely separate from critical theories, such as ecofeminism. In their upcoming book, Animal Crisis, professors Alice Crary and Lori Gruen investigate “the complex social and political contexts in which animals are harmed, revealing the connections between our callous and cruel attitudes to the animal world and those same attitudes towards vulnerable human groups.” In this talk, moderated by Emma LeBlanc (YLS ‘24), Crary and Gruen will lay out their novel approach to the argument that “there can be no animal  liberation without human emancipation.”

Lori Gruen is the William Griffin Professor of Philosophy and Professor of Feminist, Gender, and Sexuality Studies and Science in Society at Wesleyan University. She coordinates Wesleyan Animal Studies and is the author of numerous books, including Ethics and Animals, Ecofeminism, and Entangled Empathy.

Alice Crary is a University Distinguished Professor of Philosophy at the New School for Social Research. Her research areas included moral philosophy, critical theory, and critical animal studies, and her published works include Beyond Moral Judgement and Inside Ethics: On the Demands of Moral Thought.