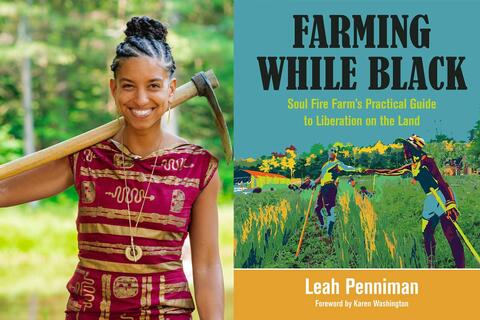 Some of our most cherished sustainable farming practices––from organic agriculture to the farm cooperative and community supported agriculture (CSA)––have roots in African wisdom. Yet, discrimination and violence against African-American farmers has led to a decline from 14 percent of all growers in 1920 to less than 2 percent today, with a corresponding loss of over 14 million acres of land. Further, black communities suffer disproportionately from illnesses related to lack of access to fresh food and healthy natural ecosystems.

Soul Fire Farm, cofounded by author, activist, and farmer Leah Penniman, is committed to ending racism and injustice in our food system. Extending this work is Leah’s recent and already widely acclaimed book, Farming While Black: Soul Fire Farm’s Practical Guide to Liberation on the Land. Join us as we host Leah for a book conversation, and to discuss how you can help build a food system based on justice, dignity, and abundance for all.

This event is free and open to the public. It is a part of the Yale Sustainable Food Program’s Chewing the Fat speaker series, as well as a kick-off event for Afro-American Cultural Center’s Black History Month programming. Event co-sponsors currently include the Yale Sustainable Food Program, Afro-American Cultural Center, and Yale Center for the Study of Race, Indigeneity, and Transnational Migration.

Starting from January 29, signed copies of Farming While Black will be available for purchase at Atticus Bookstore on 1082 Chapel St. However, this is NOT a book signing event with Leah.

AUTHOR BIO:  Leah Penniman is a Black Kreyol educator, farmer, author, and food justice activist who has been tending the soil for twenty years and organizing for an anti-racist food system for fifteen years. She currently serves as founding co-executive director of Soul Fire Farm in Grafton, New York, a people-of-color led project that works to dismantle racism in the food system. She has been recognized by the Soros Equality Fellowship, NYSHealth Emerging Innovator Awards, and Fulbright Distinguished Awards, among others.

You can preview Leah’s book in her conversation with Civil Eats here: https://civileats.com/2018/11/02/farming-while-black-is-a-guidebook-to-dismantle-systemic-racism/