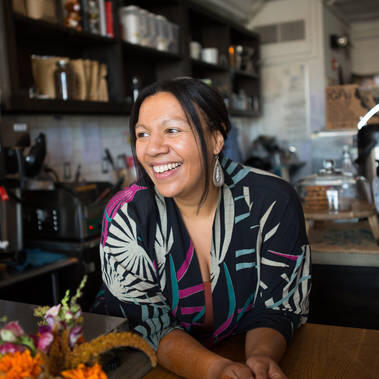 Event time:
Monday, February 24, 2020 - 4:30pm to 5:30pm
Location:
Timothy Dwight Head of College House See map
63 Wall Street
Event description:
For Black History Month, The Afro-American Cultural Center and Yale Sustainable Food Program have partnered together for a special event series, “Cooking Across the Black Diaspora.” The collaboration honors and commemorates this year’s 50th anniversary for both the Afro-American Cultural Center and Yale Department of African American Studies.
“Cooking Across the Black Diaspora” weaves into the Sustainable Food Program’s long-standing speaker series, known as Chewing the Fat. Building upon the conversations with past Chewing the Fat guests like Michael Twitty and Leah Penniman, we celebrate the food traditions and innovations of Afro and Black-identifying peoples from across the world. In hosting Nyesha Arrington, Paola Velez, Kiki Louya, and Bryant Terry, this series creates space for four chefs to share their stories, of food and identity, heritage and resilience, healing and justice.
Join us for a conversation with Kiki Louya, co-founder and co-owner of the Folk and The Farmer’s Hand, a restaurant and market that advances local, urban, and seasonal agriculture. Based in Detroit, Kiki has worked over the years throughout the hospitality industry––all while staying connected with her Congolese-American roots. As an owner, she favors triple-bottom-line practices that balance social, environmental, and financial goals. She and Head of College Mary Lui will discuss her personal journey of self-discovery through food, as well as her hopes for urban agriculture and food justice in Detroit.
Kiki Louya is a Detroit native, with degrees from the University of Michigan at Ann Arbor, and Le Cordon Bleu in Chicago. She and her work have been featured in the New York Times, Bon Appetit, The Wall Street Journal, Martha Stewart Living, and Food & Wine Magazine.
Chewing the Fat is the Yale Sustainable Food Program’s long-standing speaker series. All events are free and open to the public. This event is hosted in collaboration with the  Afro-American Cultural Center, Timothy Dwight College, and the Yale Center for the Study of Race, Indigeneity, and Transnational Migration.