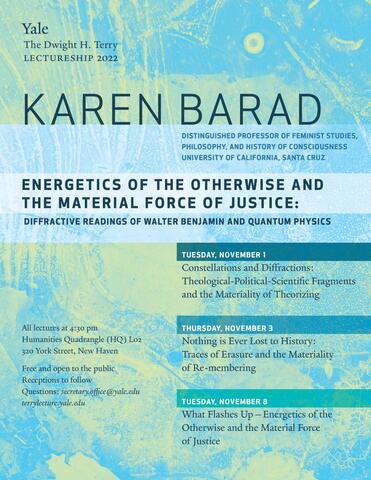 Event time:
Tuesday, November 1, 2022 - 4:30pm
Location:
HQ L02 See map
320 York Street
Event description:
About the 2022 lectures: Walter Benjamin’s messianic materialism is at the center of this diffractive reading of insights from theology, politics, and science, or more specifically, Kabbalah, materialism, and quantum physics, through one another. How might the resulting inseparability of these themes in Benjamin’s work relate the undoing of progressivist notions of temporality to the undoing of notions of essence, kind, property, individualism, and nothingness that have been foundational to nationalism, colonialism, racialized capitalism, and gender oppression? What are the implications for physics, theology, and politics?
ENERGETICS OF THE OTHERWISE AND THE MATERIAL FORCE OF JUSTICE:
Diffractive Readings of Walter Benjamin and Quantum Physics
Humanities Quadrangle (HQ) L02
320 York Street, New Haven
Free and open to the public
Receptions to follow each lecture
Tuesday, November 1, at 4:30 p.m.
Constellations and Diffractions:
Theological-Political-Scientific Fragments and the Materiality of Theorizing
Thursday, November 3, at 4:30 p.m.
Nothing is Ever Lost to History:
Traces of Erasure and the Materiality of Re-membering
Tuesday, November 8, at 4:30 p.m.
What Flashes Up – Energetics of the Otherwise and the Material Force of Justice
Karen Barad
Philosopher, physicist, and feminist scholar, Karen Barad is Distinguished Professor of Feminist Studies, Philosophy, and History of Consciousness at the University of California at Santa Cruz. Barad held a tenured appointment in physics before moving into more interdisciplinary spaces. Particularly known for the theory of agential realism, Barad is the author of Meeting the Universe Halfway: Quantum Physics and the Entanglement of Matter and Meaning (Duke University Press, 2007) and numerous articles in the fields of physics, philosophy, science studies, poststructuralist theory, and feminist theory. Barad’s research has been supported by the National Science Foundation, the Ford Foundation, the Hughes Foundation, the Irvine Foundation, the Mellon Foundation, the Fulbright Foundation, and the National Endowment for the Humanities.
Admission:
Free
Open to:
General Public
Original event page