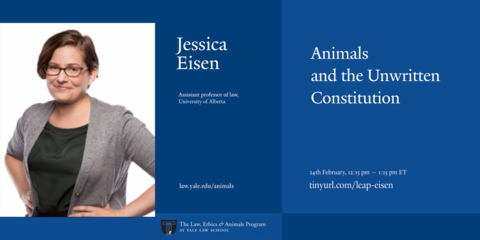 Animals and the Unwritten Constitution, with Jessica Eisen

Jessica Eisen is an assistant professor of law at the University of Alberta. Her research interests include animals and the law, constitutional and comparative constitutional law, equality and antidiscrimination law, feminist legal theory, intergenerational justice, and law and social movements. She is the author of “Feminist Jurisprudence for Farmed Animals” in the Canadian Journal of Comparative and Contemporary Law, “Milked: Nature, Necessity, and American Law” in the Berkeley Journal of Gender, Law, & Justice and “Animals in the Constitutional State” in I.CON: The International Journal of Constitutional Law.