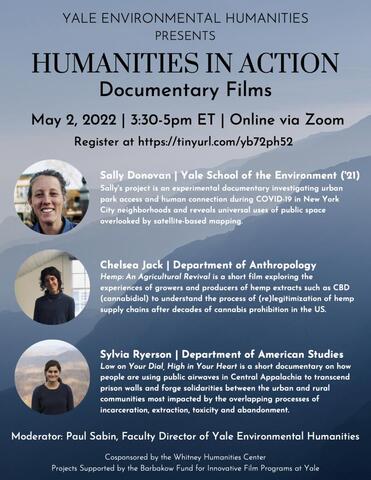 The Humanities in Action Series features Yale Environmental Humanities grantees sharing their projects, reflecting upon their research and creative processes, and collectively discussing what they have learned about engaging broader publics on environmental and social issues.

“Humanities in Action: Documentary Films” will feature Sally Donovan, Chelsea Jack, and Sylvia Ryerson, three grantees whose thematically diverse projects all culminated in the development of a documentary film. The conversation will include short clips from their film projects, which examine the value of urban parks in New York City, the growth of the hemp industry in the Hudson Valley, and the power of radio to connect communities impacted by extractive industry and incarceration in Central Appalachia.

Sally’s project is an experimental documentary investigating urban park access and human connection during COVID-19 in New York City neighborhoods and reveals universal uses of public space overlooked by satellite-based mapping.
Chelsea Jack | Department of Anthropology
Hemp: An Agricultural Revival is a short film exploring the experiences of growers and producers of hemp extracts such as CBD (cannabidiol) to understand the process of (re)legitimization of hemp supply chains after decades of cannabis prohibition in the US.
Sylvia Ryerson | Department of American Studies
Low on Your Dial, High in Your Heart is a short documentary on how people are using public airwaves in Central Appalachia to transcend prison walls and forge solidarities between the urban and rural communities most impacted by the overlapping processes of incarceration, extraction, toxicity and abandonment.
The event is co-sponsored by the Whitney Humanities Center. Funding for these projects was also supported by the Barbakow Fund for Innovative Film Programs at Yale.
Admission:
Free but register in advance
Open to:
General Public
Original event page