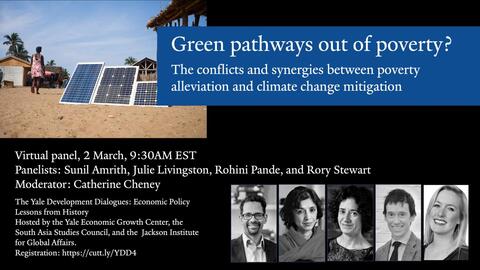 Since the 1970s, if not earlier, it has been taken for granted that there is a trade-off involved between environmental protection and development. Given the gravity of the climate crisis and the particular risk it poses to the world’s poorest people, are there are also synergies to be harnessed between those two goals? Moderated by Catherine Cheney, this dialogue features historian and anthropologist Julie Livingston, author of Self-Devouring Growth: A Planetary Parable as Told from Southern Africa, in conversation with Sunil Amrith, Rohini Pande, and Rory Stewart. Faced with the climate crisis, do we need to redefine development?

Sunil Amrith is the Renu and Anand Dhawan Professor of History at Yale, and current chair of the South Asian Studies Council. His research focuses on histories of environment, migration, and public health across South and Southeast Asia.

Julie Livingston, Silver Professor of Social and Cultural Analysis and History at New York University. Her work is at the intersection of history, anthropology, and public health.

Rohini Pande is the Henry J. Heinz II Professor of Economics and Director of the Economic Growth Center at Yale. Her research has examined the political economy of aid and empowerment of the poor in developing countries.

Rory Stewart is a Senior Fellow at Yale Jackson Institute for Global Affairs, where he focuses on contemporary politics in crisis and on international development and intervention in fragile and conflict affected states. Stewart served as the UK Secretary of State for International Development where he doubled the U.K.’s investment in international climate and environment.

Moderator: Catherine Cheney, Senior Reporter for Devex, covering the West Coast of the U.S., focusing on the role of technology, innovation, and philanthropy in achieving the Sustainable Development Goals.