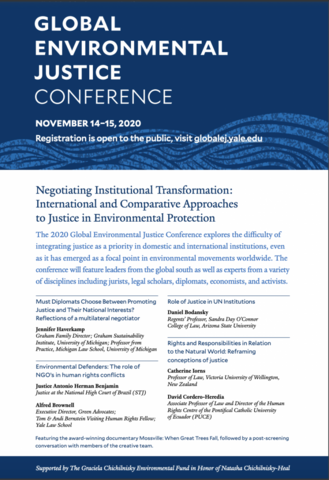 The 2020 Global Environmental Justice Conference at the Yale School of the Environment, supported by The Graciela Chichilnisky Environmental Fund in Honor of Natasha Chichilnisky-Heal, will focus on the difficulty of integrating justice as a priority in domestic and international institutions. These concerns have emerged as a focal point in both domestic and international environmental movements. We see this most graphically in the clashes on the street, but it also has impacted national policies and the inclusion of the non-human as stakeholders in the debate.

The title of this year’s conference is Negotiating Institutional Transformation: International and Comparative Approaches to Justice in Environmental Protection. The conference will feature leaders from the global south as well as experts from a variety of disciplines. The conference panelists will include jurists, legal scholars, diplomats, economists, and activists. Though the meeting will be virtual, we will have many opportunities to engage the speakers and network including an award-winning documentary film screening. Topics will range from making existing institutions work better to creating policy space for activists and nature itself.

Register at globalej.yale.edu : Open to the public, $20 for professionals, $10 for students, subsidized tickets are available.