Farbod Honarpisheh (Yale University), “The City and the Country: On the Temporal Fissures of the Iranian New Wave Cinema” (Iran Colloquium) 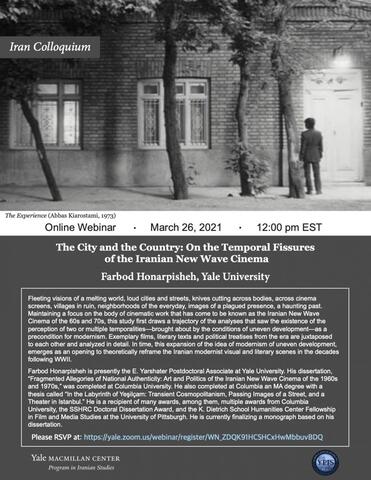 Fleeting visions of a melting world, loud cities and streets, knives cutting across bodies, across cinema screens, villages in ruin, neighborhoods of the everyday, images of a plagued presence, a haunting past. Maintaining a focus on the body of cinematic work that has come to be known as the Iranian New Wave Cinema of the 60s and 70s, this study first draws a trajectory of the analyses that saw the existence of the perception of two or multiple temporalities—brought about by the conditions of uneven development—as a precondition for modernism. Exemplary films, literary texts and political treatises from the era are juxtaposed to each other and analyzed in detail. In time, this expansion of the idea of modernism of uneven development, emerges as an opening to theoretically reframe the Iranian modernist visual and literary scenes in the decades following WWII.