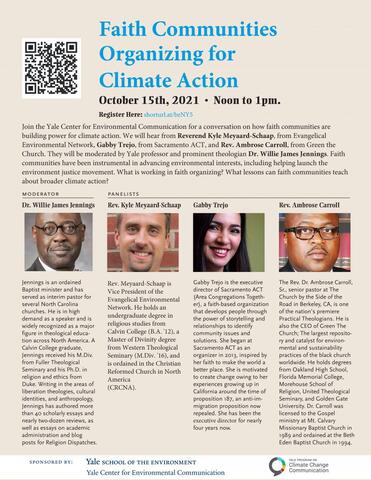 How are faith communities building power for climate action? We will hear from Reverend Kyle Meyaard-Schaap, from the Evangelical Environmental Network, Gabby Trejo, from Sacramento ACT, and Reverend Ambrose Carroll, from Green the Church. They will be moderated by Yale Divinity School Professor and prominent theologian Dr. Willie James Jennings.

Jennings is an ordained Baptist minister and has served as interim pastor for several North Carolina churches. He is in high demand as a speaker and is widely recognized as a major figure in theological education across North America. A Calvin College graduate, Jennings received his M.Div. from Fuller Theological Seminary and his Ph.D. in religion and ethics from Duke. Writing in the areas of liberation theologies, cultural identities, and anthropology, Jennings has authored more than 40 scholarly essays and nearly two-dozen reviews, as well as essays on academic administration and blog posts for Religion Dispatches.

Rev. Meyaard-Schaap is Vice President of the Evangelical Environmental Network. He holds an undergraduate degree in religious studies from Calvin College (B.A. ‘12), a Master of Divinity degree from Western Theological Seminary (M.Div. ‘16), and is ordained in the Christian Reformed Church in North America (CRCNA).

Gabby Trejo is the executive director of Sacramento ACT (Area Congregations Together), a faith-based organization that develops people through the power of storytelling and relationships to identify community issues and solutions. She began at Sacramento ACT as an organizer in 2013, inspired by her faith to make the world a better place. She is motivated to create change owing to her experiences growing up in California around the time of proposition 187, an anti-immigration proposition now repealed. She has been the Executive Director for nearly four years.

The Reverend Dr. Ambrose Carroll, Sr. is senior pastor at The Church by the Side of the Road in Berkeley, CA, and is one of the nation’s premiere Practical Theologians. He is also the CEO of Green The Church; The largest repository and catalyst for environmental and sustainability practices of the Black church worldwide. He holds degrees from Oakland High School, Florida Memorial College, Morehouse School of Religion, United Theological Seminary, and Golden Gate University. Dr. Carroll was licensed to the Gospel ministry at Mt. Calvary Missionary Baptist Church in 1989 and ordained at the Beth Eden Baptist Church in 1994.