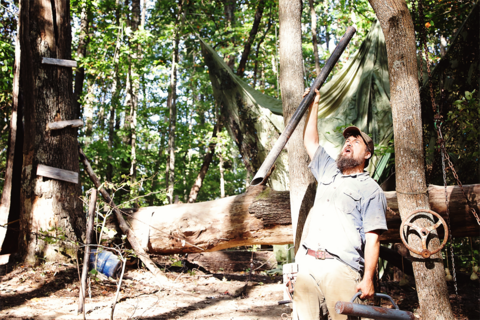 Event time:
Thursday, May 19, 2022 - 5:30pm
Friday, May 20, 2022 - 5:30pm
Saturday, May 21, 2022 - 5:30pm
Sunday, May 22, 2022 - 1:00pm
Location:
Yale West Campus See map
Event description:
Ezell: Ballad of a Land Man
A Parable of Domination & Resilience from the Foothills of Appalachia
Performance dates:
May 19, 2022 | 5:30pm–8:30pm |
May 20, 2022 | 5:30pm–8:30pm |
May 21, 2022 | 5:30pm–8:30pm |
May 22, 2022 | 1pm–4pm |
Ezell: Ballad of a Land Man is an environmental, cultural and spiritual parable derived from living in the foothills of Appalachia, one man among many seeking to make sense of the time, place and condition in which we live. In the story, Ezell’s choices, traumas, ancestors and more intersect with themes of domination and resilience as he seeks to take advantage of an anticipated fracking boom and the opportunity to reconnect with the people and land of his raising.
Ezell is in part a study of domination in the wide range of its prominent and more subtle forms — domination between a man and the land, between a man and other people, between a man and himself. It is in part a story about how climate change, the extractive resource industry and intergenerational trauma impact the choices and decisions of a man and the land he would like to call home. It is in part a ceremony that calls to our desire for connection and belonging, that reveres nature and binds us intimately within her, that invokes the resilience, love and lessons of our ancestors and generations yet to come.
Instructions:
Ezell will be performed outdoors at Yale’s West Campus in Orange, CT.
Please note that as part of the experience, attendees will walk a total of approximately one mile outdoors on uneven ground accompanied by a guide with a farm-to-table meal following the performance. Accessible accommodations for the entire journey are possible with advance notice.
Register here.
Presented by Yale Schwarzman Center and the Yale School of Public Health in partnership with Faultline Ensemble, Ezell will be performed outdoors at Yale’s West Campus in Orange, CT.
Funders for Ezell include: The Burroughs Wellcome Foundation and Yale Environmental Humanities’ Grant Program. New England Foundation for the Arts’ National Theater Project, with lead funding from the Andrew W. Mellon Foundation and additional funding from the Doris Duke Charitable Foundation. Ezell is a National Performance Network (NPN) Creation & Development Fund Project co-commissioned by Carpetbag Theater in partnership with Mondo Bizarro and NPN. Ezell is made possible, in part, through a Continuation grant for our partnership with Mondo Bizarro from the Network of Ensemble Theaters’ Travel & Exchange Network (NET/TEN), supported by lead funding from The Andrew W. Mellon Foundation. Ezell has also been supported through Kentucky Artist Rescue Funds and an Al Smith Fellowship Award granted to Bob Martin for artistic excellence from the Kentucky Arts Council, the state arts agency, which is supported by state tax dollars and federal funding from the National Endowment for the Arts. The tour of Ezell to communities on the frontlines of the fossil fuel economy is supported by the Chorus Foundation as they work together with our communities for a just transition to a fair and sustainable economy. Ezell was seeded and evolved over many years with the support of Alternate ROOTS through the Partners in Action program, an Artistic Assistance grant, fiscal sponsorship and the ongoing learning & support of an amazing network of artists.
Admission:
Free but register in advance
Original event page