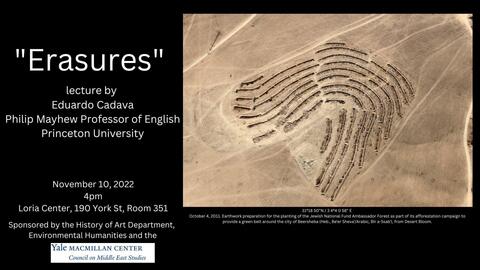 Eduardo Cadava is Philip Mayhew Professor of English at Princeton University. He is the author of Words of Light: Theses on the Photography of History, Emerson and the Climates of History, and Paper Graveyards. He has co-edited Who Comes After the Subject, Cities Without Citizens, and The Itinerant Languages of Photography. He also has introduced and co-translated Nadar’s memoirs, Quand j’étais photographe, which appeared with MIT Press in 2015 under the title When I Was a Photographer and has curated installations and exhibitions at the MAXXI Museum in Rome, the Slought Foundation in Philadelphia, Storefront for Art and Architecture in New York, the Al-Ma’mal Center for Contemporary Art in East Jerusalem, and the Princeton University Art Museum. He is the co-author of Politically Red, forthcoming from MIT Press in 2023.

This talk takes its point of departure from Fazal Sheikh’s multi-volume project on the Israeli-Palestinian conflict, The Erasure Trilogy (2015). Exploring the legacies of the Arab-Israeli War of 1948, this project imagines the possibility of exposing and countering the various processes of erasure that, over the last several decades, have sought to erase both the violence of this history and the acts of erasure themselves.

Sponsored by the History of Art Department, Yale Environmental Humanities, and the Council on Middle East Studies.