David Haskell (University of the South),”Ecology and Story – David Haskell discusses his book The Songs of Trees: Stories from Nature’s Great Connectors” (Yale School of the Environment) 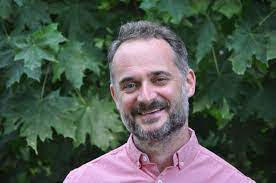 David Haskell  holds degrees from the University of Oxford (BA) and from Cornell University (PhD). He is Professor of Biology and Environmental Studies at the University of the South, where he served as Chair of Biology. He is a 2014-2015 Fellow of the John Simon Guggenheim Foundation, a Fellow of the American Council of Learned Societies, and an Elective Member of the American Ornithologists’ Union. His scientific research on animal ecology, evolution, and conservation has been sponsored by the National Science Foundation, the Environmental Protection Agency, the Fish and Wildlife Service, the World Wildlife Fund, among others. He has also written another award winning book, The Forest Within, which was a finalist for the Pulitzer Prize. E.O Wilson writes, “Haskell leads the reader into a new genre of nature writing, located between science and poetry, in which the invisible appear, the small grow large, and the immense complexity and beauty of life are more clearly revealed.” Deborah Blum, Pulitzer winner, writes, “David George Haskell may be the finest literary nature writer working today. The Songs of Trees – compelling, lyrical, wise – is a case in point.” Watch: David George Haskell, Indira Naidoo, “Interconnection, Conservation and the song of trees”