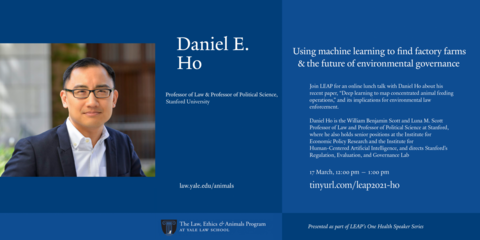 Event time:
Wednesday, March 17, 2021 - 12:00pm to 1:00pm
Location:
https://yale.zoom.us/meeting/register/tJEkceqorjkiHNXDhH3tpwr35W2AWpc7ZPmn See map
Event description:
More than nine in ten American farm animals live in confined animal feeding operations (CAFOs). Also known as factory farms, these operations create dirty, disease-ridden, and cruel conditions for both animals and the people who work there. The huge volumes of waste generated by so many animals also contaminate the surrounding environment and harm the residents who live nearby. Given the cruelties and environmental injustices associated with CAFOs, it is surprisingly difficult for regulators, like the EPA and state agencies, to collect data on where, how many, and how big they are. Last year, however, Daniel Ho and a fellow researcher were able to use machine learning over satellite images to locate over 500 previously unmapped CAFOs in satellite images of North Carolina. In this talk, moderated by LEAP Student Fellow Jeamme Chia, he will discuss the potential for this technology to help regulatory agencies and advocates measure the scope and limit the harms of factory farming and the implications of such approaches for the future of environmental governance.
Daniel E. Ho is the William Benjamin Scott and Luna M. Scott Professor of Law and Professor of Political Science at Stanford, where he also holds senior positions at the Institute for Economic Policy Research and the Institute for Human-Centered Artificial Intelligence, and directs Stanford’s Regulation, Evaluation, and Governance Lab.
This event is presented as part of the Law, Ethics & Animals Program’s One Health Speaker Series, and it is co-sponsored by the Yale Sustainable Food Program, the Environmental Protection Clinic at Yale Law School, the Yale Animal Law Society, and the Yale Environmental Law Association.