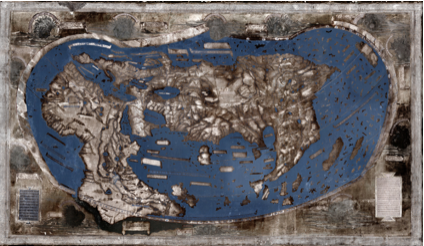 Event time:
Monday, October 3, 2022 - 4:00pm
Location:
Online via Zoom See map
Event description:
Chet Van Duzer, historian of cartography, will discuss the Martellus Map in conjunction with the current building-wide exhibition, The World in Maps, 1400-1600. Part of Mondays at Beinecke online, a virtual series of gallery talks every Monday at 4pm. Talks focus on materials from the collections and include an opening presentation at 4pm followed by conversation and question and answer beginning about 4:30pm until 5pm. Click here for Zoom webinar registration.
Henricus Martellus, a German cartographer working in Florence in the late 15th century, produced a highly detailed map of the known world. According to experts, there is strong evidence that Christopher Columbus studied this map and that it influenced his thinking before his fateful voyage. Read more about the Martellus map here.
Chet Van Duzer is a board member of the Lazarus Project at the University of Rochester, which brings multispectral imaging to cultural institutions around the world. He has published extensively on medieval and Renaissance maps; his recent books include Henricus Martellus’s World Map at Yale (c. 1491): Multispectral Imaging, Sources, and Influence, published by Springer in 2019, and Martin Waldseemüller’s Carta marina of 1516: Study and Transcription of the Long Legends, published by Springer in 2020. He recently finished the first book about cartographic cartouches, which will be published by Brill in 2022.
Admission:
Free
Open to:
General Public