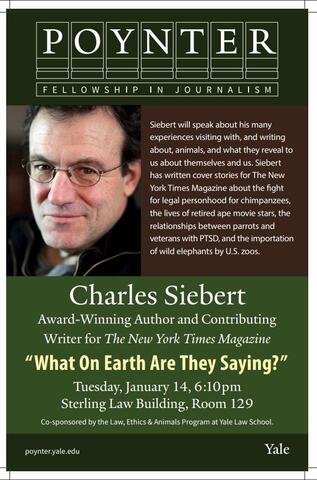 Event time:
Tuesday, January 14, 2020 - 6:00pm to 7:30pm
Location:
Sterling Law Building Room 129 See map
Event description:
Award-winning author and journalist, Charles Siebert, will speak about his many experiences visiting with, and writing about, non-human animals, and what they reveal to us about themselves and us. Through his interludes with everyone from a former cellist in an all chimpanzee circus orchestra; to an octopus escape artist; to elephant and whale ventriloquists; to traumatized orphaned parrots who heal equally traumatized war veterans, Siebert will introduce us to the animal within all humans; the common biology and languages we share with other beings; and the costs of failing to ask “What On Earth Are They Saying.”
Charles Siebert is a Professor of Practice of Literature and Creative Writing at New York University Abu Dhabi as well as an accomplished essayist, journalist, poet, and author. He is a contributing writer to the New York Times (including 14 magazine cover stories) and has also written for The New Yorker, Harper’s Magazine, and National Geographic, among other publications. His three critically acclaimed memoirs (The Wauchula Woods Accord: Toward A New Understanding of Animals, A Man After His Own Heart, and Wickerby: An Urban Pastoral) and other writings offer insight into our relationships with animals, the natural world, and each other. His most recent New York Times magazine cover story examined the importation of African elephants by U.S. zoos, and was a driving factor behind the passage of a new CITES (Convention on International Trade in Endangered Species) resolution that prohibits the future importation of wild elephants for zoo exhibits.