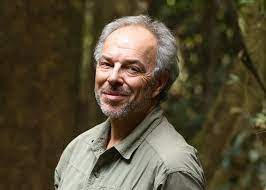 Carl Safina  an ecologist and author writes about the human relationship with the natural world. His books include Becoming Wild: How Animal Cultures Raise Families, Create Beauty, and Achieve Peace; Beyond Words: What Animals Think and Feel; Song for the Blue Ocean; Eye of the Albatross; The View From Lazy Point: A Natural Year in an Unnatural World; and others. He has won many awards including the Lannan Literary Award, Orion Book Award, John Burroughs medal, and a MacArthur Genius award. He is the founding president of the Safina Center, and is inaugural holder of the Carl Safina Endowed Chair for Nature and Humanity at Stony Brook University. Safina hosted the PBS series Saving the Ocean.  See his Ted talk    What animals are thinking and feeling, and why it should matter and his website https://www.carlsafina.org. Audubon magazine named Safina among it “100 Notable Conservationists of the 20th Century and Utne reader listed him among “25 Visionaries Changing the World.