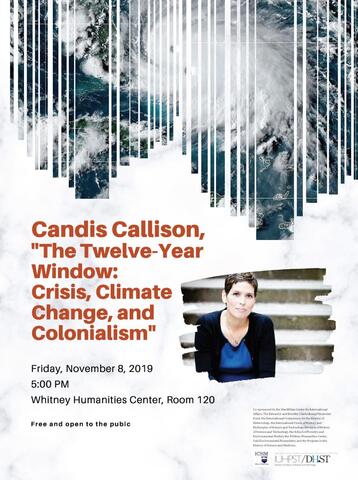 Candis Callison is an Associate Professor in the Graduate School of Journalism and in the Institute for Critical Indigenous Studies. at the University of British Columbia. Her research and teaching are focused on changes to media practices and platforms, journalism ethics, the role of social movements in public discourse, and understanding how issues related to science and technology become meaningful for diverse publics.

Candis is the co-author of Reckoning: Journalism’s Limits and Possibilities (Oxford University Press, 2020), which draws on five years of research with journalists in the U.S. and Canada at a variety of news organizations including startups, legacy media, and freelancers. Candis’ first book, How Climate Change Comes to Matter: The Communal Life of Facts (Duke University Press, 2014) used ethnographic methods and a comparative lens to bring together the work of science journalists, scientists, and three distinct social groups that are outside environmental movement and policy frameworks in an American context.

In 2019, Candis was inducted into The American Academy of Arts and Sciences, and she was the guest speaker at MIT’s 2018 Investiture of Doctoral Hoods. Candis was on leave from UBC during the last academic year (2018-19) and at Princeton University where she was the Pathy Distinguished Visitor in Canadian Studies. While at Princeton, she co-convened the International Symposium on Climate Change and Indigenous Communities.

Candis is Tahltan, an Indigenous people located in Northwestern British Columbia. She is a regular contributor on the podcast, Media Indigena. She was also named to Open Canada’s 2018 list of Indigenous Twitterati. Candis is a member of the Advisory Circle for The Indigenous Screen Office.