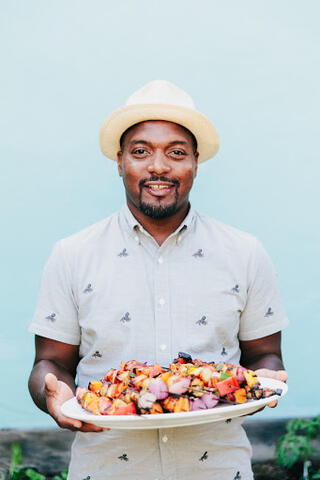 “Cooking Across the Black Diaspora” weaves into the Sustainable Food Program’s long-standing speaker series, known as Chewing the Fat. Building upon the conversations with past Chewing the Fat guests like Michael Twitty and Leah Penniman, we celebrate the food traditions and innovations of Afro and Black-identifying peoples from across the world. In hosting Nyesha Arrington, Paola Velez, Kiki Louya, and Bryant Terry, this series creates space for four chefs to share their stories, of food and identity, heritage and resilience, healing and justice.

Join us for a conversation with Bryant Terry, James Beard Award-winning chef, educator, activist, and author. The author of five cookbooks, Bryant’s newest book, Kingdom, debuts this February and will be on sale for this event. As the chef-in-residence at the Museum of the African Diaspora, Bryant creates public programming that weaves together food, farming, health, activism, culture, and the African Diaspora. In a conversation moderated by Saybrook College Dean Ferentz Lafargue, Bryant will share about what cooking has meant for his identity and heritage, and how it inspires his belief in a just, healthy, sustainable food system.

Bryant Terry has been the chef-in-residence at the San Francisco Museum of the African Diaspora since 2015. He holds a master’s degree in History with a concentration in the African Diaspora from NYU, and is author of five cookbooks, earning a James Beard award for Afro-Vegan in 2014.

Chewing the Fat is the Yale Sustainable Food Program’s long-standing speaker series. All events are free and open to the public. This event is hosted in collaboration with the Afro-American Cultural Center, the Yale Center for the Study of Race, Indigeneity, and Transnational Migration, Saybrook College, People Get Ready! Books, the Table Underground, and LoveFed New Haven.