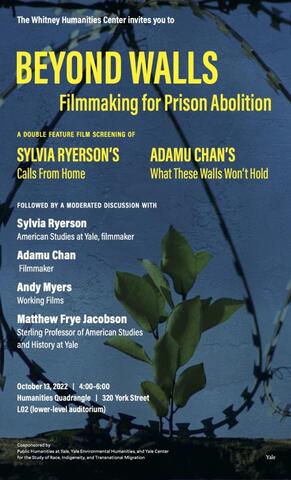 Event time:
Thursday, October 13, 2022 - 4:00pm
Location:
Humanities Quadrangle (320 York Street), L02 See map
Event description:
How might films about life within prisons help us imagine a future without them? How can filmmakers, nonprofit organizations, scholars, and community members collaborate to amplify prison abolition?
A double bill film screening of Sylvia Ryerson’s Calls from Home and Adamu Chan’s What These Walls Won’t Hold, which were both awarded funding by Working Films through the 2021 Docs in Action Film Fund(link is external). Sterling Professor of American Studies & History Matthew Frye Jacobson will moderate a post-screening discussion about filmmaking for prison abolition with the filmmakers—Sylvia Ryerson and Adamu Chan—and the Director of Campaigns and Strategy at Working Films, Andy Myers.
Calls from Home
In an intimate portrait of rural prison expansion, Calls from Home, documents WMMT-FM’s longstanding radio show that sends messages over the public airwaves to reach those incarcerated in Central Appalachia. For many, the show provides a lifeline to the world outside. Sharing the stories of the family and friends who call in, and those who listen in from prison, the film portrays the many forms of distance that rural prison building creates—and the ceaseless search to end this system of mass incarceration and family separation.
Sylvia Ryerson is a PhD candidate in American Studies at Yale University, multimedia artist, organizer, and Yale Environmental Humanities grantee.
What These Walls Won’t Hold
The COVID-19 crisis inside California prisons has claimed the lives of over 200 incarcerated people and infected tens of thousands more. This film tracks the origins of COVID-19 inside the California state prison system and a newly formed coalition, led by currently and formerly incarcerated people, that brought forward an abolitionist framework to a life or death situation. What These Walls Won’t Hold explores how relationships, built on trust, shared liberatory struggle, and connections across broader abolitionist organizing work, can unfold into sites of resistance and radical change.
Adamu Chan is a filmmaker, writer, and community organizer from the Bay Area who was incarcerated at San Quentin State Prison during one of the largest COVID-19 outbreaks in the country.
Cosponsored by Public Humanities at Yale, Yale Environmental Humanities, and Yale Center for the Study of Race, Indigeneity, and Transnational Migration
4:00pm, Humanities Quadrangle (HQ), L02
Admission:
Free
Open to:
General Public
Original event page