On Barak (Tel Aviv University), “Beached: The Construction and Thermal Dynamics of the Levantine Coast” (Yale School of Architecture) 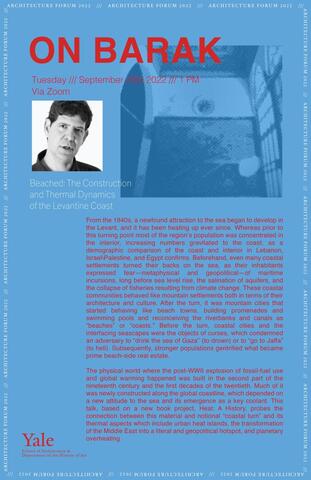 Event time:
Tuesday, September 20, 2022 - 1:00pm
Location:
Online via Zoom See map
Event description:
From the 1840s, a newfound attraction to the sea began to develop in the Levant, and it has been heating up ever since. Whereas prior to this turning point most of the region’s population was concentrated in the interior, increasing numbers gravitated to the coast, as a demographic comparison of the coast and interior in Lebanon, Israel\Palestine, and Egypt confirms. Beforehand, even many coastal settlements turned their backs on the sea, as their inhabitants expressed fear—metaphysical and geopolitical—of maritime incursions, long before sea level rise, the salination of aquifers, and the collapse of fisheries resulting from climate change. These coastal communities behaved like mountain settlements both in terms of their architecture and culture. After the turn, it was mountain cities that started behaving like beach towns, building promenades and swimming pools and reconceiving the riverbanks and canals as “beaches” or “coasts.” Before the turn, coastal cities and the interfacing seascapes were the objects of curses, which condemned an adversary to “drink the sea of Gaza” (to drown) or to “go to Jaffa” (to hell). Subsequently, stronger populations gentrified what became prime beach-side real estate.
The physical world where the post-WWII explosion of fossil-fuel use and global warming happened was built in the second part of the nineteenth century and the first decades of the twentieth. Much of it was newly constructed along the global coastline, which depended on a new attitude to the sea and its emergence as a key coolant. This talk, based on a new book project, Heat: A History, probes the connection between this material and notional “coastal turn” and its thermal aspects which include urban heat islands, the transformation of the Middle East into a literal and geopolitical hotspot, and planetary overheating.
On Barak is a social and cultural historian of science and technology in non-Western settings. He is an Associate Professor at the Department of Middle Eastern and African History at Tel Aviv University, and the author of several books, including Powering Empire: How Coal Made the Middle East and Sparked Global Carbonization (University of California Press, 2020), and On Time: Technology and Temporality in Modern Egypt (University of California Press, 2013). Prior to joining Tel Aviv University, Barak was a member of the Princeton Society of Fellows and a lecturer at the history department at Princeton University. In 2009, He received a joint Ph.D. in History and Middle Eastern Studies from New York University.
Click here to register.
Admission:
Free but register in advance
Open to:
General Public
Original event page