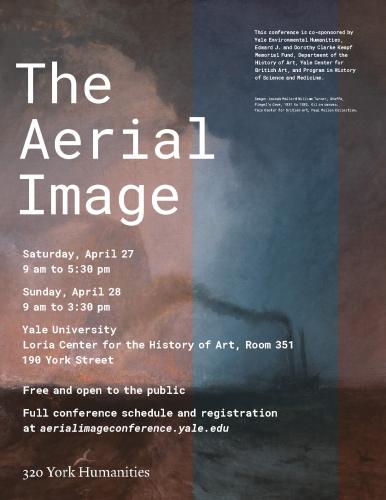 This interdisciplinary conference explores the ”aerial image,” broadly conceived. Drawing upon recent work in the environmental humanities, the conference aims to open critical dialogue around representations of climate, atmospheric pollution, and weather in historical context, as well as prescient studies of the historical intersections of flight, fuel, and aerial image-making practices. In considering the ways that technology, energy, and industrialization have re-shaped aerial spaces since early modernity in Europe and North America, the conference responds to our current moment––marked by the unfolding crisis of anthropogenic climate change and the ongoing deployment of drones and aerial surveillance in both private and military contexts.

“The Aerial Image” is part of the Yale Environmental Humanities 2018-19 program on the energy humanities. It has been generously sponsored by Yale Environmental Humanities, Edward J. and Dorothy Clarky Kempf Memorial Fund, Department of the History of Art, the Yale Center for British Art, and the Program in History of Science and Medicine.
External link:
https://aerialimageconference.yale.edu/