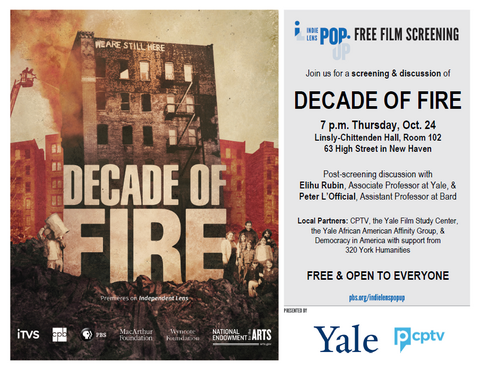 Event time:
Thursday, October 24, 2019 - 7:00pm
Location:
Linsly-Chittenden Hall, Room 102 See map
63 High Street
Event description:
Join us for a free screening and discussion of Decade of Fire, a new documentary by Vivian Vázquez Irizarry, Gretchen Hildebran, and Julia Steele Allen, followed by a discussion with Yale’s Elihu Rubin and Bard’s Pete L’Official.
In the 1970s, fires raged through the South Bronx. Abandoned by landlords and city officials, nearly half a million residents were displaced from their beloved meighborhood. With the help of fellow survivors, filmmaker and Bronx native Vivian Vázquez Irizarry tells the story of the residents who banded together amidst the rubble and built a better future for their community.